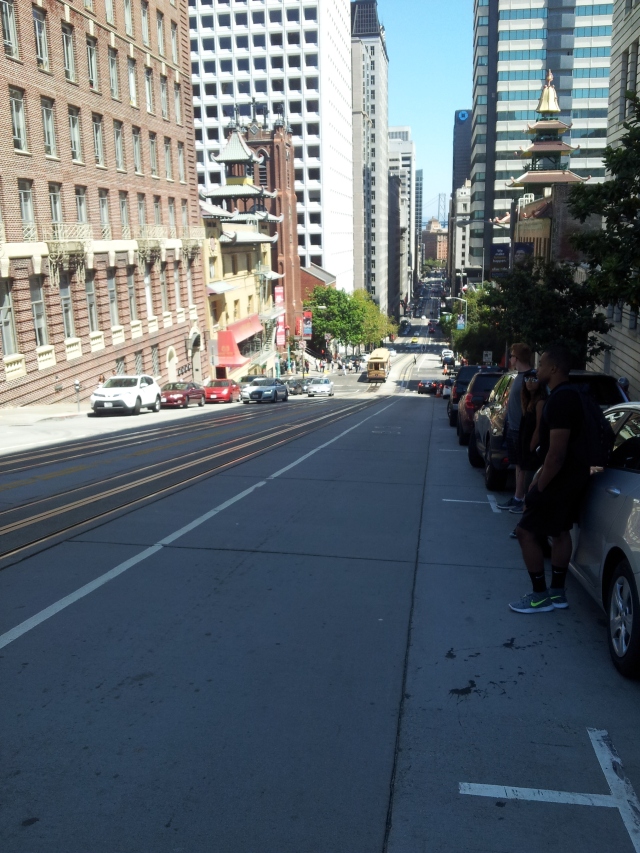 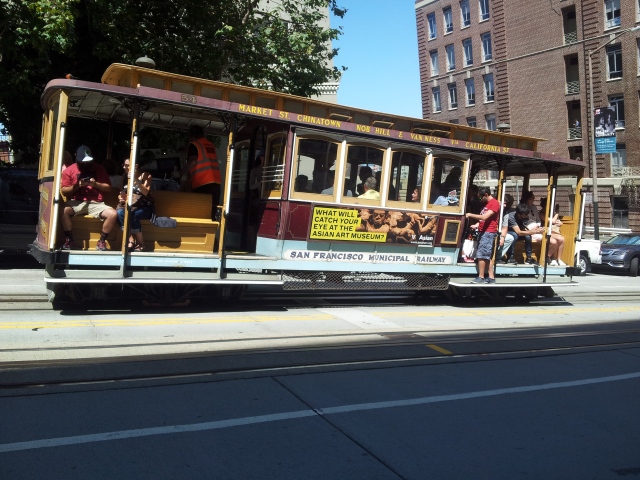 You wouldn’t need the name on the cable car to guess which city you were if you’d been dropped into the middle of the city.  All the traffic was quite sedate around town though – either not the day – or the era – for those infamous car chases down those hills.  (Or was that all just dramatic licence?)  I’ll work on a better perspective photo when we’re back here again in a few weeks.

No time or ‘awakeness’ for much in the way of sightseeing. Obtain currency.   Lunch  in Chinatown, a block up from the hotel. (Disappointing.) Obtain local SIMS for the phones.  Grab a power nap. (Feeling pretty shattered after the flight).  We met up for drinks with an Aussie couple (from the Facebook Bike Touring group) who are about to set out on a ride from here to LA – and liked the bar enough that we stayed on after they left to have a hamburger and fries.

Customs was ‘meh’ – so much for all the publicity about all that.

A lot of homeless people.

A lot of people smoking out on the streets.

The ATMs only dish out $20 notes, no 50s!
US money is bland and hard to distinguish between the notes.
Tipping. *sigh*.  Just makes it all harder.

I just realised my normal casual greeting is ‘G’day’, so I will probably have to focus a bit more.

Marc’s crashed out again here on the bed, so I think we better go to bed properly. Have to get ourselves to Oakland Airport in the morninng for our flight to Portland. Thence a hire car drive to Eugene. The forecast for both those tomorrow is 37 degrees!

One thought on “The Streets of….”