Big day in the climbing department with the big hill out of Leggett providing the big challenge to look forward to today. (Or rather to be a bit anxious about). On top of that, I had a Garmin debacle.  Somehow when I was unplugging it from the usb charger my fumble fingers hit a random screen that was asking me if I wanted to reset. Hell no, says I, as I hit the big X.  It carried on resetting regardless, and there was no way to back out of it.  All the settings and tweaks I’d painstakingly made over the past few months, through consulting various Garmin 1000 blog posts and reviews… Gorn!

So then the route for the first leg of the day wouldn’t load. As we were pedalling out of town (because we couldn’t get the heck out of Garberville quickly enough, and we also knew we had a huge day with a huge climb ahead of us) I was mucking around with it. Got the course to load with no turn by turn instructions. But, me being me, couldn’t leave well enough alone, and at our first break I decided to end the recording and turn the wretched thing off and on again in the hope it would come good.  Nup. Then the course would not load AT ALL. It would get to 99% then beep a Recalculation Error,  again and again and again.

I turned it off and we figured out the rest of the back road options before having to rejoin the 101 to Leggett.   And somehow at Leggett (where we fortunately found a great little cafe/kiosk – one that I hadn’t found in my google maps research), I managed to get it to load the course without navigation so that for the big hill out of Leggett I could monitor the elevation screen. Whether that’s a good thing or not I don’t know, but I’m convinced it helps when you have proof that the top is only 100m away. I swear I get a rush of adrenaline in my legs.

Because of the Garmin issues, and the climbing, I didn’t really end up taking that many photos… and the ones below are a combination of the big hill, and the smaller one at Rockport.

We left the heat and sunshine on the Leggett side as we sweated our way up… and had to don merinos part way down the other side because we’d immediately descended into fog.

At that first (aforementioned) stop – around Piercy it seems, even though there was nothing there – we met a solo German bike tourer who stopped to chat. We caught up with him again at Leggett, and chatted some more.  Loving the people we are meeting along the way.

Despite the cloud, when we hit the coast we were still pretty excited, because NO FOG, and NO SMOKE!! (We even got the selfie stick out – as for every day so far, there are still photos from Marc’s camera to include., so, yes, there’s more editing to do yet.) 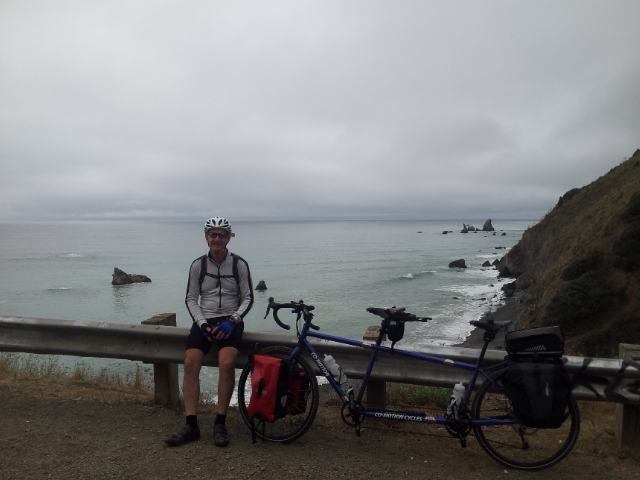 We were pretty happy to reach Westport, and were glad, at that time of day that we weren’t continuing another 27k to Fort Bragg like the couple of Aussie Poms (or Pommie Aussies?) from Perth that we met back at that last photo stop. 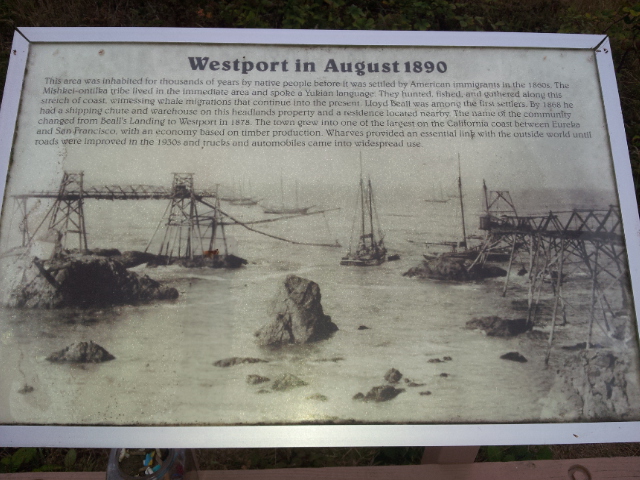