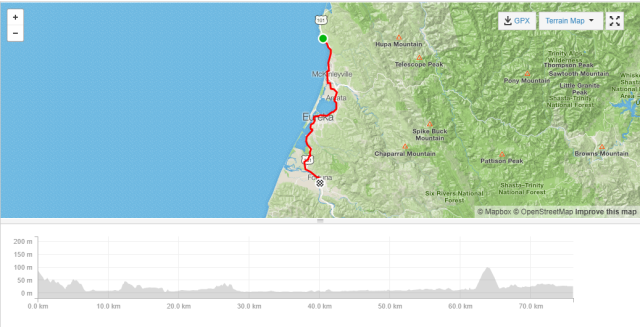 Now in Fortuna, in what feels pretty fancy compared to what we’ve been staying in. (For not much more, it should be said – so we’ve decided to have our next rest day tomorrow on the basis of accommodation quality, rather than what the town is like. Have the feeling we’re a bit in redneck country though. Only a few k’s up the road we copped our first road rage abuse as we went past a bit of a hick-looking town.  And I can hear what sounds like gun shots – possibly at a range, but all the same….)  Yet to check out Fortuna itself.
* We just had dinner at the Eel River Brewing Co, just metres away from the hotel.  Cool place, good food, and yet again Marc is spoilt for choice with the craft beer scene. (And I’m on the wheat beer… so much for me and my barely-drink-alcohol-anymore thing.  I seem to have replaced the coffee with beer.  Guess the universe will realign when I get home.)

Today’s ride covered a bit of variety with the scenery.

We had spectacular ocean views this morning, after a nervous start when the beginning of the Scenic Drive that was part of our route out of Trinidad had a ‘Road Closed 1.5 miles’ sign. Fortunately we took a chance. It wasn’t closed, and the sun was shining and we finally got to enjoy the renowned coastal views.

After the Scenic Drive we joined a really long coastal shared path that led us nearly all the way to Arcata.

[I’m gradually editing this, since what I thought I posted at lunchtime in Eureka turned out to be sitting there as a draft. This motel has a laundry, so no trekking around town for a laundromat. (Worth the extra dollar in cost.) … Have a bit of editing to do of previous day’s posts too…  Something to do while Marc is snoring over there on the king bed 😀 ) 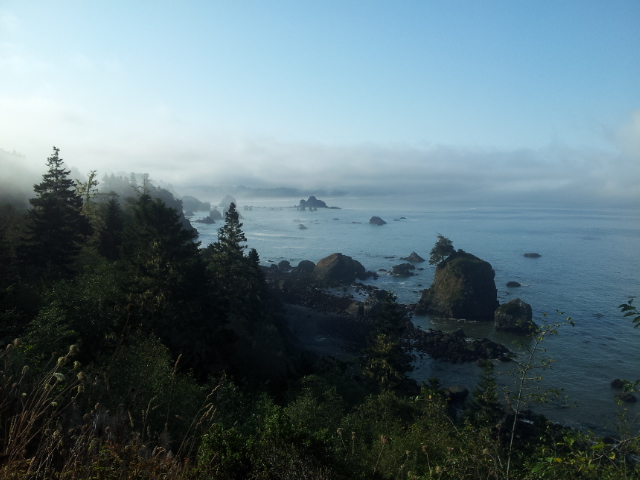 Looking back north towards Trinidad bay.

We had a bit of freeway, then we ducked off again, and onto this bike path for quite a few k’s.  It did turn to gravel in one section (and up a hill), but it was worth it. 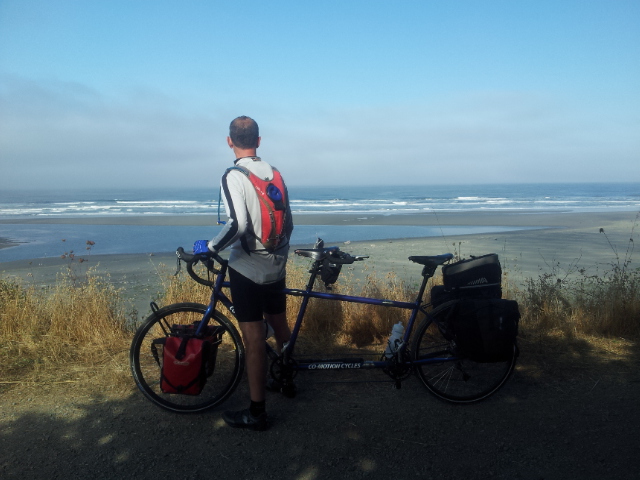 The bike path skirted McKinleyville in farmland that was reminiscent of places we’ve cycled at home.  Into Arcata – at which stage I had a bit of a panic because I lost the map on the Garmin – all I could see was the route on an otherwise blank screen.  It made it interesting navigating into town, but we got there, and found a pretty cool, organic type (super)market that had a bakery (and juice bar) in it, with an eating area tacked on to the side.  (Arcata is a bit of a hippy-ish University town – we passed a bunch of people marching for suicide awareness)

Back to the Garmin- after I’d decided to end the ride recording and to do the old ‘have you tried turning it off and on again), Marc asked if the SD card was ok.  Hmmm. Actually, no. Cover was off, and it was partly ejected.  Map problem solved, and a bit of a ‘phew’ that the sd card didn’t fall out somewhere along the road.

Arcata to Eureka wasn’t much more than 10k, and along the freeway.  But we got a dose of home with all these Eucalypts lining the edge of the road!! Possibly Blue Gums, as we could see the distinctive saplings. 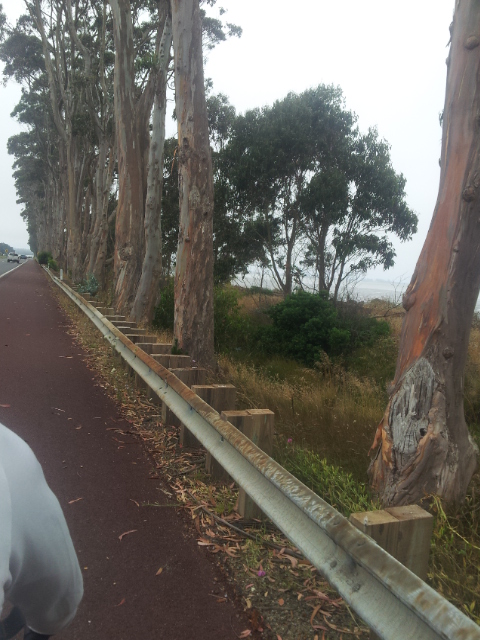 The rest of the ride south of Eureka included yet more variety. A newish bike trail along the water.  A few kms of freeway, then off again.  (Stopped for a break before a bit of a hill at the entrance to this Wildlife Refuge – and couldn’t help but roll eyes at how it’s a Wildlife Refuge  but in a goodly portion of it  you can kill the birdlife.  ​​