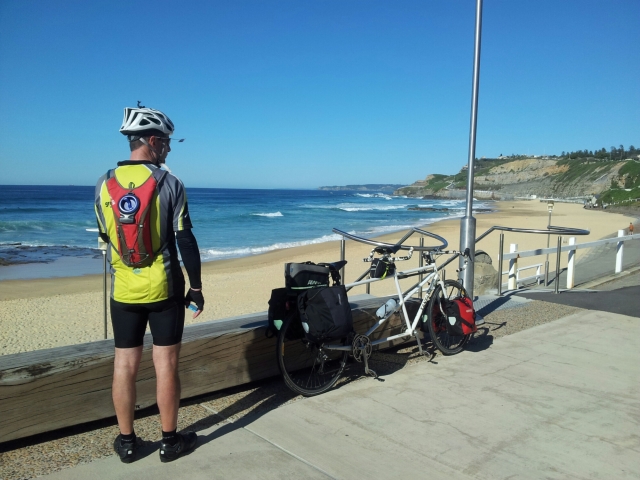 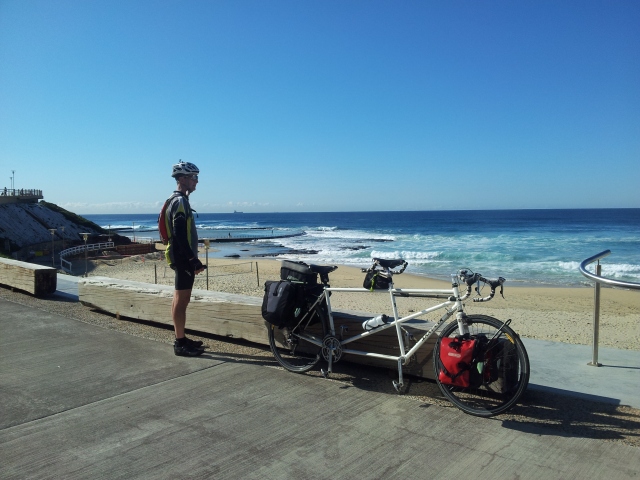 Quick view check before leaving Newcastle… and a chat with a passing English couple about bike touring!

Marc had researched the flattest route out of Newie, as we headed for the start of the Fernleigh Track  at Adamstown.    We spied a “COFFEE – This Way –>” sign at a roundabout just before the start…  so (for my sake!) we followed the directions a couple of blocks to a corner cafe, with an outdoor eating area in the backyard: (this is a google street view capture)…

It was all very quirky, and looked to be bike friendly, what with being close to the Fernleigh Track, and with families with bikes parked outside the fence.  There were instructions to use the intercom in the back area to order if you’re sitting out there, although the guy came out and took our order… then the drinks took so long to come we nearly got up and left… and then I’d finished my coffee before the food I’d ordered arrived, so I said ‘forget it’.  Maybe they were just having a bad day, but it was disappointing (and my nutbar was a poor subsitute for a snack.)

The 16k of the Fernleigh Track is a joy to ride. Smooth hot mix… It is a bit of a grind to the top at Whitebridge – but a hoot downhill all the way to Belmont. We overtook a trio of smart-aleck roadies who had passed us with some flippant ‘haha swap ya’ remarks on the way up.  An older guy on another road bike obviously knew the benefits of drafting tandems, and tucked in behind us until we got away from him.

We chatted to him for a while at the end of the track at Belmont, and then headed for the loos in the shopping centre nearby, passing and waving to another couple on a tandem. (We were ready to stop for a chat, but they kept going, which was a bit disappointing!) 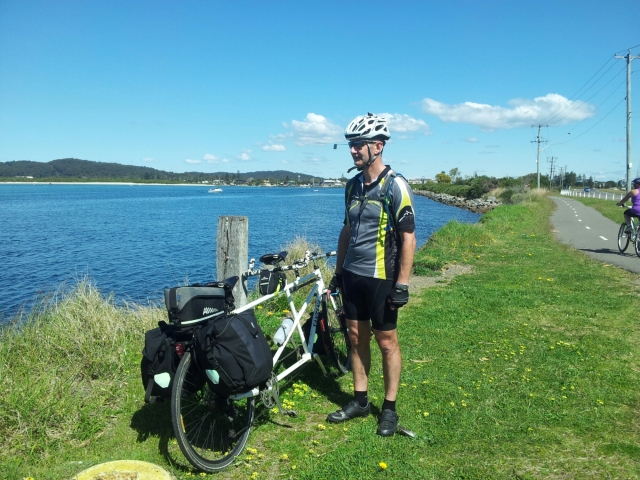 Only another 6.5 k to Swansea, some of it, with a bit of a bike track leading us the last stretch of parkland and over the bridge.  Coffee and food required before the hill south out of Swansea, and the “Catherine Hill Bay rollers” stretch – which we’ve done a couple of times previously, so we unfortunately knew what we were in for!

It was a relief to turn off the highway at Munmorah.  Lunch time for fish and chips by the water at Budgewoi.  (Two shop choices, I think we chose the wrong one. Fish was overcooked. 😦  ) 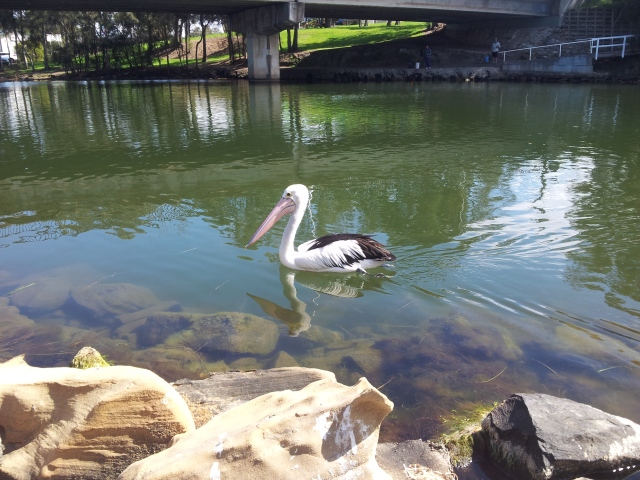 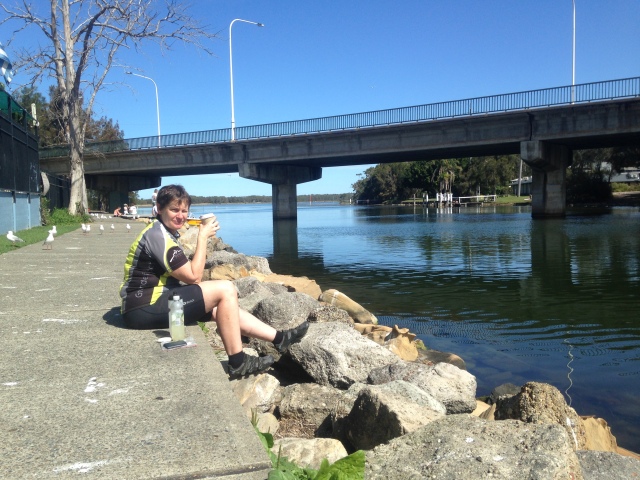 We were feeling a bit weary by this point. We stopped again at The Entrance after only 15k for an ice cream.  But hey… it’s a tour, not a race. 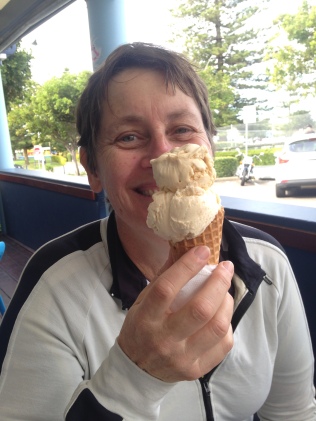 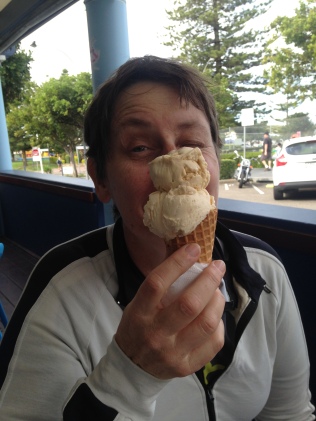 We made a  little side trip to check out Toowoon Bay for a look-see.  It was, by this time, 3.00 in the afternoon, but feeling, somehow, like it was later.  (I think we were just tired!) 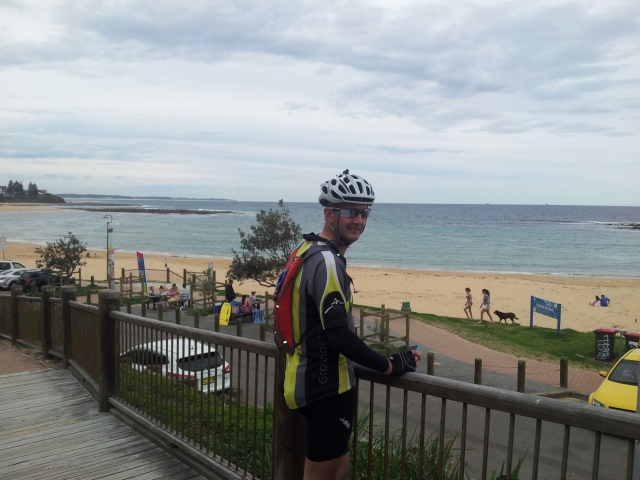 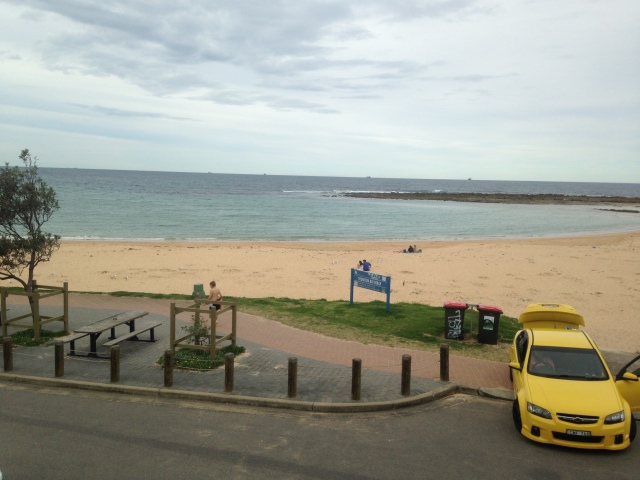 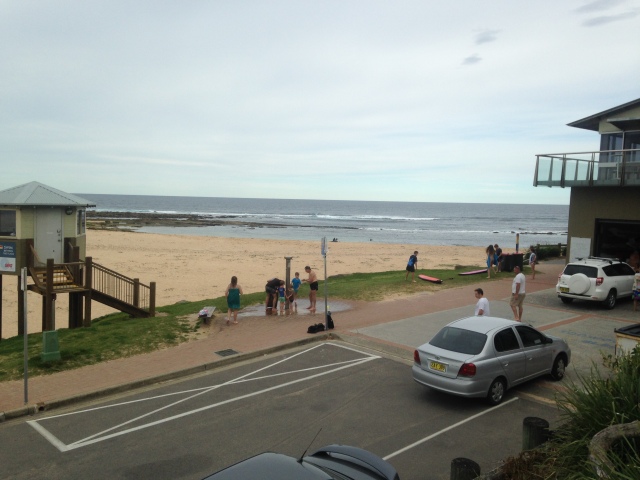 Our original planned destination for today was Terrigal but we were struggling to find motel accommodation there. The night before we settled on Forrester’s Beach, and frankly I was relieved not to have had to pedal even one more metre.

This was the first place we actually just booked online, rather than phoning and asking for either a ground floor room or somewhere to store the bike overnight. We figured we could sort it when we arrived… but the receptionist wasn’t too helpful about that! Fortunately she called the manager/owner, who couldn’t have been more helpful. She offered us a swap from the allocated 1st floor unit to a ground floor corner unit with room for the bike. We were happy as anything with that – and the bed and pillows turned out to be the best of the whole trip.

We also got lucky with a little Italian restaurant a few hundred metres away for dinner, keeping our record of not having to get back on the bike at night to get food!