Our original plan was to head to Bulahdelah for the night, via the Lakes Way (which would have been 63km)  but we heard about the Old Mining Trail (and Old Gibber Trail) through Myall Lakes National Park, and got the heads up from the National Parks Officer (at the Ruins campground office) that this road was “great”!

Note to selves… if you’re going to extend the day’s ride by a good 30k, maybe set out a bit earlier!

Our change of route was going to put us half a day ahead of our schedule (it would have been 40+  km the next morning to get to the ferry at Tea Gardens), so we basically just switched days on distances.  We still would have had dirt road between Bulahdelah and Bombah Point, and we now don’t have any knowledge of the condition of that road! 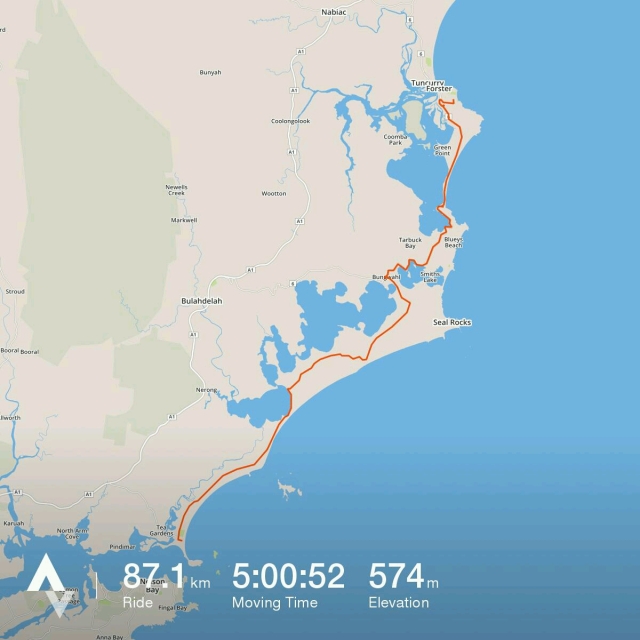 So the Seal Rocks Rd turn off is about 30k south of Forster, along the Lakes Way (The Ruins Campground and NPWS office is about 12k out – depends of course on where in Forster you start from.

There were options for food at Smiths Lake, but we were at the point of not wanting to add any extra distance to the day, so we went for the Bungwahl takeaway ‘mentioned by the National Parks officer.  (Fortunately it was open… food was.. ok… and the adjoining servo had snacks we could stock up on.)

Another 4.5k down Seal Rocks Road to the Mining Road Trail.   (You can see on our strava route that we overshot the gate entrance and had to double back!)

(We haven’t been to Seal Rocks in years, so it might have been nice to check that out, but again, no time or energy for detours. Looks like it’s about 6.5k from the Mining Rd Trail into Seal Rocks, where there is a campground.)

So here’s Marc’s write up of the trail:

The road from Seal Rocks Rd to Mungo Brush is gated at both ends and is 20 kms long. The northern half, The Old Mining Road, is rolling small hills all much the same size. They feel like ancient sand dunes now covered in forest. The slopes are a bit rocky with a lot of the fines washed away from between rocks embedded in the clay base. The flats are good with smooth surface. The southern end, The Old Gibber Fire Trail, is flatter and just a low scrub. However there are many places where NPWS have ‘fixed’ the road by dumping a tipper load of shaley clay into a puddle or soft spot. These have not been rolled or graded with a machine just driven over a few times. Some are very bumpy and you can’t leave the firm line else you start sinking. Some of the shale chunks are a bit big. However we rode the whole way despite nearly not making it out of a couple of those repaired bits. [Ed: and slewing off the road once, fortunately managing to stay upright!]  Between the repaired bits it’s pretty good gravel. Slowish going but nowhere near as bad as Maria River Rd. 50mm tyres would be better than our 32mm on this although I was happy not to have anything slower on the 22km asphalt to Hawks Nest.

Scenically it was just lovely, and so nice to have no traffic.  Bear in mind that “no passing traffic” means no passing support if you have any mechanical issues or injuries. Early on we passed one NPWS vehicle (or contractor), but then didn’t encounter another soul.  I don’t know if NPWS do a daily run along the trail/s or not.    That 21k of dirt took us just over 2 hours (with a couple of short breaks), and, despite setting out on it at 1.30 in the afternoon, we had this constant feeling of pressure. (Possibly the cloudy day added a bit to the sense of gloom and feeling like we were going to run out of daylight.).

Fortunately we had no gear or human breakdowns, but probably the smart thing to do would be to aim to do this section in the morning.

We were, I admit, relieved to hit the tar at Mungo Brush.  It was then another 25k into Hawks Nest along Mungo Brush Rd. The road was pretty flat, and we didn’t have a single car pass us (only a couple going the other way.)   By that time, though, we were pretty tired.   Dirt road riding (maybe more so on the tandem? I don’t know) takes it out of you in the upper body.