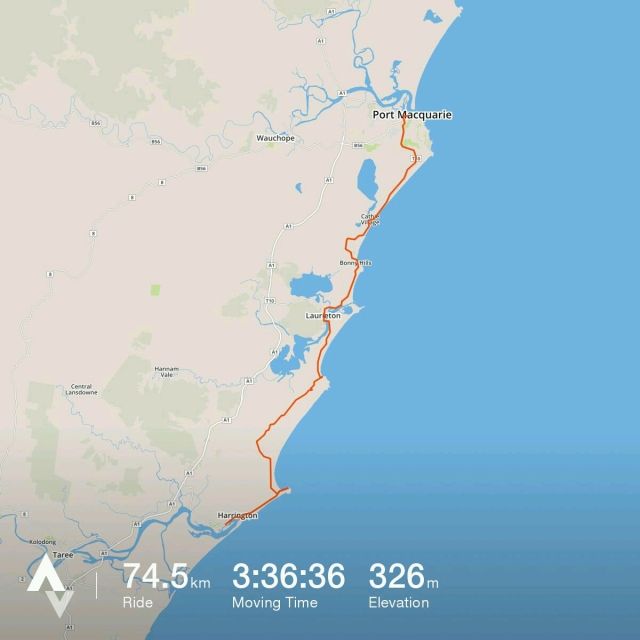 Ocean Drive, heading south out of Port, turned out to be pretty darn bike friendly, almost through to North Haven.  A combination of infrastructure –  bike lanes, (even through most roundabouts) and familiarity with cyclists, and thus an unprecedented amount of passing courtesy.   There are parts, of course, like most of Australia, where the lane just disappears when it’s too hard for council to figure out how to make it continuous (or even a logical transition).  But, in the main… stress free cycling, until things go back to ‘normal’ by the time you’re heading into North Haven.

South of Laurieton we’d decided to give the Diamond Head/Crowdy Bay dirt road a go. I’d tried to find out about it before our trip, and some weeks before I’d ended up ringing National Parks at Crowdy Bay. The guy there said he thought it would be fine as it was 2wd friendly.   He did say the condition did vary a bit, but it was due for grading/maintenance…

As it turned out, it looked like it had only recently been done! Good timing on our part, I think, just before school holidays – both for the grading aspect, and to do it before even the Qld/Vic school hols (which are often a week before NSW).  We didn’t have many cars to deal with at all… Wouldn’t be quite so much fun with holidayers.

So, with the above provisos, it gets a thumbs up from us.