First stop Lake Cathie (pronounced ‘cat-eye’) snack time. Only 17k in, but how could you not stop here?

Hastings motorists were awesome. Overwhelmingly courteous, gave you heaps of room when passing. Marc had thought they might be used to cyclists because it’s part of a triathlon route, and the motorists would be used to lots of bikes out training. He was right.  I was actually gobsmacked, mouth agape, the contrast to our previous two days riding was that noticeable. Goes to show that there is some truth to the theory that the more bikes there are out there, the more motorists ‘see’ bikes, and the whole road sharing thing just works better.  Everyone’s nice and courteous to each other. Happy days.

(Notably, by the time we were coming into North Haven the drivers were starting to forget their manners. Interesting studies in human behaviour.)

Quick view snap at Bonny Hills.. It’s quite a picturesque ride in parts, with some even better views that we didn’t stop to photograph.

We had an early lunch at Laurieton before tackling the dirt road to Crowdy Head .

The condition of the Diamond Head-Crowdy Bay road was even more of an unknown beforehand, but it turned out to be great!

The dirt road had been graded recently, and doesn’t get the same sort of traffic as Maria River Rd, so it was *bliss* in comparison (and average speed 2-3 times what we were doing yesterday!) 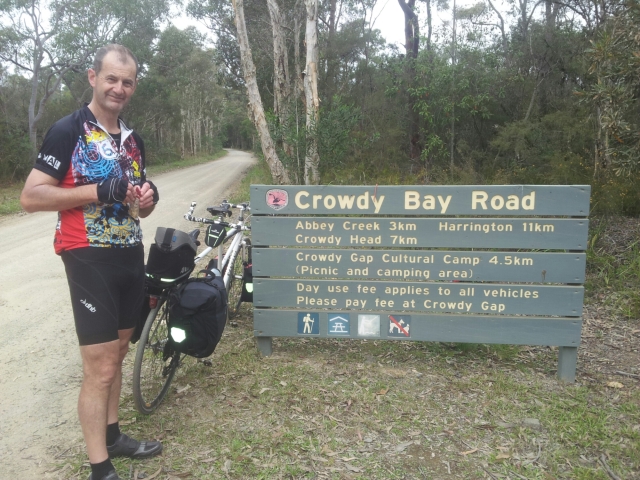 So all in all the road was great! Hardly any cars, good surface. Really enjoyed the ride.

On reaching the tar of Crowdy Head Rd, we took a quick detour out to Crowdy Head to check it out. (A bit of reminiscing..we figured that this was the place we pitched a tent overnight in the boat trailer parking area about 30 years ago! We had thought it was a nice quiet and deserted place to stealth camp, but woke up at 6am surrounded by boat trailers! Ah memories.)

Incoming weather! We had fingers crossed it didn’t mean we’d be riding in the rain the next day… but the forecast wasn’t great.

A tandem-friendly ride, then, into Harrington (tandem friendly meaning nice and flat, with the Captain cranking up the speed…. which was fun, but I was kinda relieved to see the 50kph signs ahead!)

Wow, Harrington is a very sprawled out place.  Turned out the motel we’d booked was a good 3-4k along the river at the other end.

Even though it was overcast and a bit on the cool side, we kept up our ‘icebath’ trend, much to the bemusement of the motel owner.

After a combination of asking his advice about dinner, and google map consulting, we opted for an Irish pub for dinner… It was a 1.7k walk! (good to use some different muscles)… through a very weird, newish, but uninhabited looking estate.  The food was, however, excellent, and we’d thoroughly recommend it! (Harrigans Irish Pub.)