A big day out.  Add a couple of kilometres to that 97 total, because we forgot to put Strava on until we’d cycled down the road a bit of the way from the motel, doubled back to the cafe we’d missed, and then remembered to start recording a few hundred metres after a rushed ‘come on we’ve got to get going’ departure. (It was a yummy breakfast though!)

Next trip I think I should try to wear a GoPro fixed to my helmet or something and use it to snap still photos as we’re riding. If you stopped to take photos of all the nice scenery and interesting things you’d never get to your destination. And you don’t always feel like losing the momentum you’ve built up on a laden tandem.

We got through  Macksville (and over the bridge) without incident.  (How good will it be when that bypass is finally open!) A quick loo stop, and we were keen to get this next bit of highway (alongside the bypass construction zone) before the Scotts Head turn off out of the way.

Last few hundred metres before the turnoff, there’s a downhill, and then a bridge over the river, with, of course, no shoulder.  We’re doing 45-50k down the hill (not bad – it’s an 80k zone).  There’s a 4WD towing a caravan behind us.  And he’s blowing the horn at us as we hit the bridge. Not sure what he wanted us to do. Evaporate?  Bunny hop over the railing and into the water?  He squeezes past us (with oncoming traffic),  passenger yelling abuse at us, and cuts back in with his caravan mere centimetres away.

We really should put a camera on the back, and take  incidents like that to the police.  Whether you’d get anywhere or not, I don’t know.

By then we were starting to formulate the first of several  ‘Schmidts’ Laws’ (or Observations) with regard to cycling on the roads.

There are always exceptions to the rule, of course, but this is the first:

It was a relief to get off the highway – and although we knew this ‘scenic detour’ (we’ve ridden parts of it before) would have hills, there’s no way we’d want to tangle with the combination of highway traffic and construction zones (where they tend to block what shoulders are available with barricades… just because?)

But of course, then you get to ponder the intelligence of drivers (and/or their understanding of the road rules).

There are those who quite cheerfully and easily manage to slow down a bit behind us, wait till the road ahead is clear, then overtake (complete with indicators) giving us easily the 1.5m or more clearance.

I made it my new strategy to always  wave a thank you to those drivers.   (I hope that a positive schedule of reinforcement will, well, reinforce that positive behaviour, and relationship between car and bike.)

I have this vain hope that maybe others will observe this behaviour and be inclined to emulate it.

But of the other drivers. Other than the massive dickheads like the earlier guy, there are a few other types.

There are the squeezers, of course. Those who don’t understand that they are allowed to pass bikes even over double lines and so pass with stuff all clearance, with this seeming belief that their car and a bike will easily fit within the width of a car lane (and they’re not endangering the lives of the cyclists they’re passing that way.

And then there are those who seem to know that they’re allowed to pass over double lines, but forget the important part. ie. “when it is safe to do so”.

I lost count of those came up behind us, pulled out and passed, giving us enough clearance, BUT didn’t worry about being unsighted as to oncoming traffic around the bend.

There were more than a few occasions when I thought we might get tangled up in a head-on.

Some idiot drivers (who were mainly headed to Scotts Head, so there were less to contend with once we turned off onto Grassy Head Road.  One road side break, a couple of nasty hills, and a magpie attack, and we reached the sleepy little town of Stuarts Point. 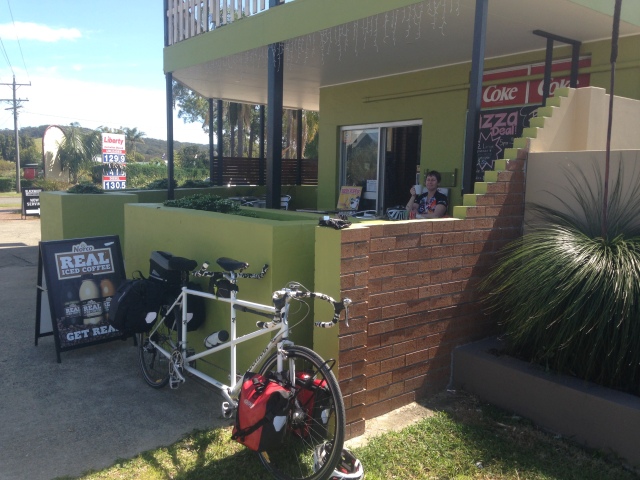 Stuarts Point takeaway. (As long as they have coffee, it’ll do.) (Just don’t buy the sausage roll!)

Nothing too salubrious there, but the locals pointed us to the campground for the cleaner loo option.   Looked nice, but with many ks to go for the day, we didn’t have time to explore.

Back out to what used to be the highway, but is now Macleay Valley Way, and destination Clybucca Roadhouse for lunch.

The last time we drove that road it was highway, so it felt almost post-apocalyptic with the lack of traffic.   And the roadhouse was all but deserted, when it used to be a crowded truckstop.  Not sure how long it will last – the owners are apparently building the service centre up on the highway.

Meanwhile it makes for a great cycling route.

We then headed back east off the main drag, through Gladstone, and via Belmore River Road towards Crescent Head, where I’d booked the motel for the night.

No long vehicles? Think we’ll get away with it. 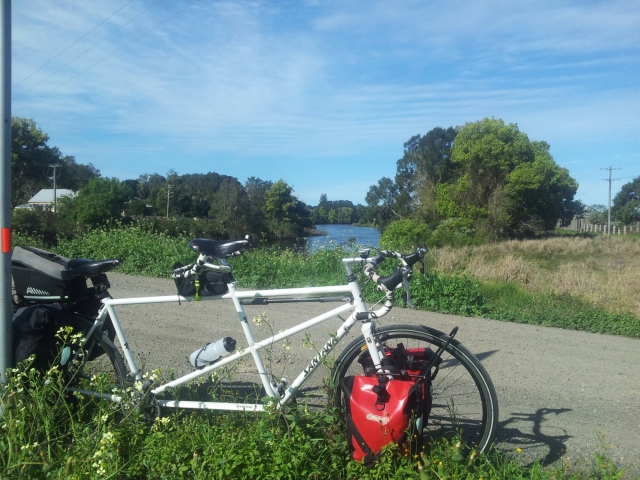 This was out along Belmore River, the back road to Crescent Head. (There’s a road on either side, and this an out of the way break on the road bridge.) 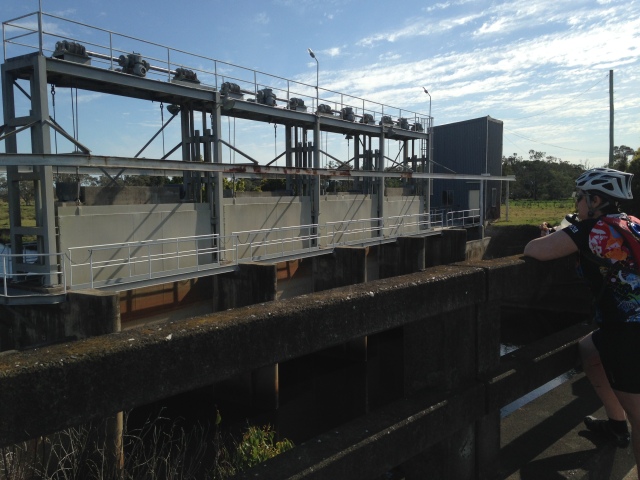 And then turning off onto Loftus Road… only about 12k to go. Nice countryside. But a big day.

Booked in, quick change, and then hightailed it down to the beach.. went in waist deep for some ocean style ice bath therapy. 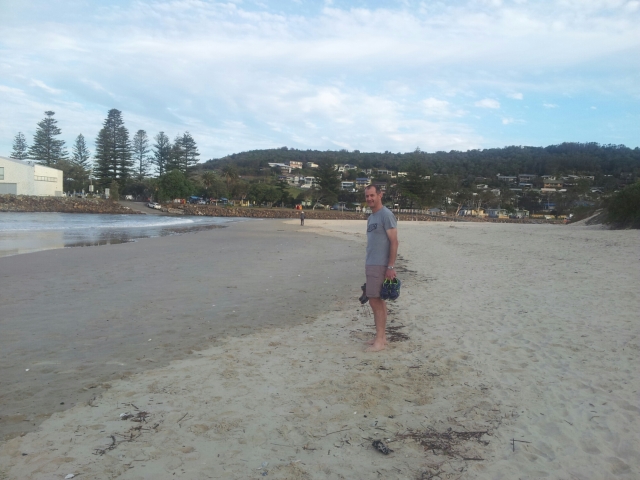 And then find somewhere to hang the washing!

Second day down.  A bit long.. .but there was really no other option.

One thought on “Day 2 – Nambucca Heads to Crescent Head ”